In Sri Chinmoy's philosophy, sports and spirituality go hand in hand. He was particularly fond of running, and he often compared the inner journey of self-discovery to a running race. He felt that sports kept the body fit and healthy, which is important in order to meditate effectively, and that they also offer people the possibility of getting joy by transcending their own capacities.

Sri Chinmoy and his students strive every day to better their previous capacities, in the hope that they will in turn inspire those who hear about them to persevere in pursuing their own dreams in life.

Inspiration is of paramount importance. If I can inspire someone, and if that person also can inspire me, then we can do many good things for the betterment of this world. 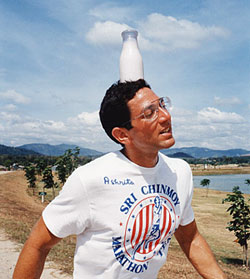 In 1979, Ashrita from New York, broke his first Guinness World record for the most jumping jacks continuously performed. He went on to achieve the record for the most Guinness World records - with records in disciplines as varied as juggling, pogo sticking, hula hooping and balancing. In 2009, he became the first person to hold 100 records simultaneously. More at ashrita.com » 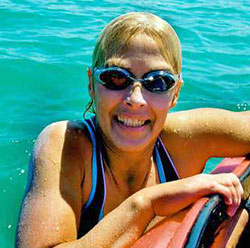 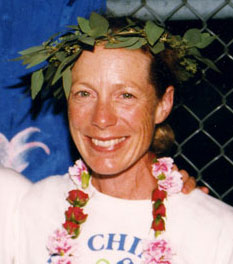 Suprabha from Washington DC, is one of the most travelled ultra distance runners in the world. For many years she was the only woman to have completed the world's longest race - the 3100 Mile Self Transcendence Races with 13 completed races between 1997 and 2009. 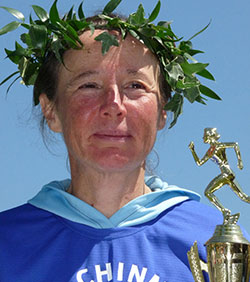 Dipali from Australia has consistently been one of the best women ultradistance runners in the world for the past fifteen years, and currently has held the women's world road record over 6 days for the past 11 years. In 2009 she broke her own record with a mark of 513 miles, at the age of 53. 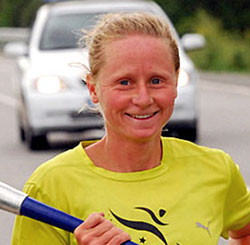 Samunnati competed for her native Ukraine in the 2016 Olympics. She has won a string of European marathons, including Toulouse, Edinburgh and Belfast and a personal best of 2:28 in Dublin. She also frequently participates in the Sri Chinmoy Oneness-Home Peace Run. 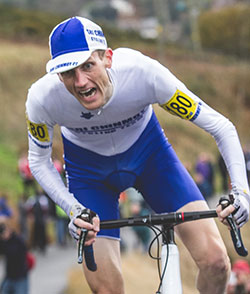 Tejvan races for the Sri Chinmoy Cycling Team in the UK, and won many domestic cycle races. He has won the 2013 National Hill Climb and placed 3rd in the National 100 mile TT in 2014. 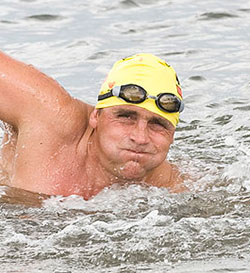 Karteek from Scotland is a prolific English Channel Swimmer, having swum the Channel now eleven times. 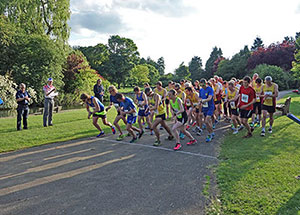 Stories about Self-Transcendence by members of the Sri Chinmoy Centre.

From: Ultra running, to channel swimming and triathlons.

Inspired by the philosophy of self-transcendence, The Sri Chinmoy Marathon Team was founded in 1977 as a service to the running community. It started by organising races in the local New York area, but it has since grown into the largest organiser of endurance events in the world, holding running, swimming triathlon and other events in over 20 countries world wide.

In 1996 the Sri Chinmoy Marathon Team launched the first edition of the 3100 Mile Self-Transcendence Race, which is the longest certified road race in the world. It takes place every year from June to August in Queens, New York. The 3100 Mile race homepage contains up to date race information, as well as Spirit of a Runner, the most complete documentary produced about the race so far. Visit 3100 homepage »

In the early years, Sri Chinmoy was a frequent participant in the early races staged by the team, and his prolific marathon and ultramarathon output inspired his fellow team-members to reach higher and loftier sporting goals themselves. In his later years he entered into the field of weightlifting, and accomplished remarkable feats of inner and outer strength well into his seventies. More on Sri Chinmoy's sporting achievements » 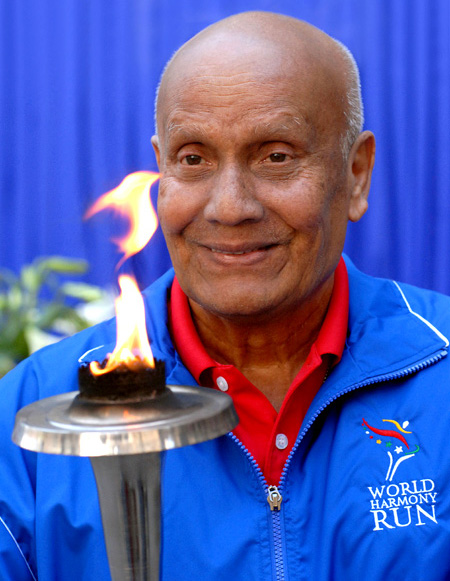 Sri Chinmoy also saw the potential of sports as a means to bring people of all different walks of life together in pursuit of a shared goal. For example, he loved the Olympics for their capacity to rise above all that the differences that cause disharmony in mankind:

The Olympics tower above all man-made differences. They are infinitely bigger than race. They are eternally brighter than colour. They are supremely better than religion. They are not only constantly one with the evolution-hunger of aspiring mankind but are also humanity's satisfaction-meal and perfection-nourishment. 3

In 1987, the Sri Chinmoy Oneness-Home Peace Run was inaugurated, the world's largest relay event for peace. The run aims to build bridges of friendship and understanding between people of different countries and cultural backgrounds, and show that the most important things in life are things that we all have in common.