Video
Sri Chinmoy felt music was a universal language that everyone could relate to. He encouraged us to incorporate singing into our daily meditation practise, make arrangements of his meditative songs and perform them free of charge in concerts around the world.

During his lifetime, Sri Chinmoy composed over 22,000 soulful songs and gave almost 800 free concerts of music all over the world.

Some of our musical members:

Ghantika and her whole family became students of Sri Chinmoy. Ghantika plays the saxophone in Bartika's Jazz Group, an all-female group that performs Sri Chinmoy‘s melodies in a combination of jazz, rock and pop styles.

Bartika's Jazz Group (with Ghantika on the saxophone) play their arrangement of 2 of Sri Chinmoy's songs at the Songs of the Soul Concert, Augsburg, June 2011.

A singer and accomplished piano accordionist, Toshala is also a member of the international women's group Shindhu.

Toshala plays 'Amal Dhabal Pal' by Sri Chinmoy on piano accordion. This recording was part of the 'Shindhu 8' album released by Shindhu.

Agnikana has been surrounded by music since her childhood and leads a group that plays spiritual music in concerts all over Europe. She is also a fast runner over short and long distances.

A song from a live concert performance by Agnikana's Group in Vaasa, Finland in 2010

Samalya became a student of Sri Chinmoy when he was 19. A talented athlete, he holds a current mile PB of 4:18. He also loves music, and recorded his first CD with the group Ashru Dhara in 2011.

A track 'Se Amare Dake' from Ashru Dhara's album 'From a Higher World', on which Samalya plays harmonium.

Music as a form of meditation

"When we play soulful music, psychic music, then immediately we are transported to the highest realm of consciousness. When we play music soulfully, we go high, higher, highest. Each time soulful music is played, we get inspiration and delight. In the twinkling of an eye, music can elevate our consciousness."

Sri Chinmoy asked his students to share musical and orchestral performances of his songs as part of meditations, and often gave detailed guidance on how to get the most out of the songs in terms of soulfulness and perfection. He would often spontaneously compose songs and teach them to his students in the traditional Indian fashion, singing them and listening as they were sung back to him. Singing forms an important part of our daily meditations, as well as our twice-weekly group meditations.

Sri Chinmoy gave the following advice about listening to music:

Let us not try to understand music with our mind. Let us not even try to feel it with our heart. Let us simply and spontaneously allow the music-bird to fly in out heart-sky. While flying, it will unconditionally reveal to us what it has and what it is. What it has is Immortality's message and what it is is Eternity's passage.

Many Sri Chinmoy Centres all around the world organise concerts of meditative music for the general public, in a wide variety of formats, from instrumental duets to large orchestral performances. The concerts are always given free of charge.

Note: the 'more' links below take you to the Radio Sri Chinmoy site, which hosts a large collection of meditative music by Sri Chinmoy and his students that you cal freely listen to and download. Flute: A popular and accessible accompaniment to meditation. more »

Where do we offer concerts?

Songs of the Soul 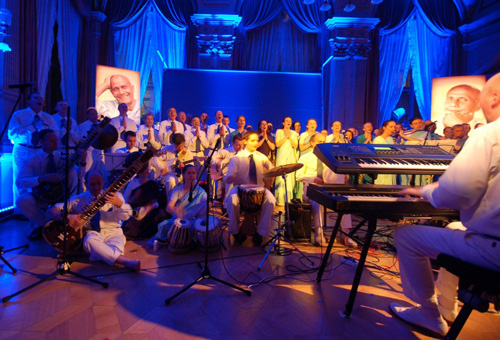 In April 2008, a series of concerts called Songs of the Soul began as a tribute to Sri Chinmoy's musical legacy. These concerts feature a variety of different performances in both Eastern and Western style, and occasionally feature guest musicians.  Find out more on songsofthesoul.com...

Links to other sites:

More about music on srichinmoycentre.org: